To any of my straight male readers who are still looking for Mrs Right, how’s this sound for an ideal woman. Darla

Enlow is a busty blonde bombshell from Oklahoma and if that’s not enough to get you interested, she also directs slasher films!

Imagine the possibilities. “Hi Honey, I’m home. What’s the plan for tonight?” “Well I thought we’d watch the entire Friday the 13th series whilst getting blazingly drunk and then make love like rabbits until the sun comes up!” Sound good? Come on, you know it does…

The Stitcher is the third title in her low-budget DTV trilogy and it’s reputedly the best. I do also have Toe-Tags and

Branded in front of me, but I thought I’d watch this one first.

It tells the tale of a group of youngsters that head down south to visit their friend who has inherited a large house from the death of her Auntie. They soon run in to The Stitcher, a psychopathic killer with a bizarre and morbid history. With only minimal contact with the outside world, they are left to battle the maniac on their lonesome…

Unlike the majority of no-budget DTVs that I watch, I started The Stitcher with high hopes that I’d really like it. Maybe in a peculiar way, I thought if I wrote a positive review here, Darla Enlow would read it, come and knock on my door, whisk me away to Oklahoma where we would elope and have an army of kids with names like Michael Freddie Voorhees and Jason ‘Leatherface’ Cropsy. But no, unfortunately, I respect telling the truth to you dear

reader much more than I do the chance of landing a fine Southern lassie with an awesome hobby. Anyway, the problem with this one is not a lack of directorial talent from Enlow. It’s just that her filmmaking philosophy bus is not one that I enjoy riding aboard.

You see, to say I’m not the biggest fan of Troma style horror flicks is like saying that if you catch him in the right mood, David Hasslehoff will have the odd beer. Aside from their numerous pick ups (Graduation Day, The Fanatic, Blood Hook et al), I think Troma’s methodology is the most unappealing thing since bagpipes were invented. The reason I tell you this is because I consider them to be the originators of toilet humour in a horror picture. Perhaps it was just that I

didn’t get the jokes, but I was laughing at people farting and smoking grass when I was eight years old. I look for a bit more than that nowadays.

The players here are all unlikeable and arrogant, which reminded me of the bad run that I’m currently experiencing. I don’t remember the last time that I saw a modern slasher with a character that I wanted to survive :(. This is one of the key things that I think that the genre needs to address moving forward so that we can have the chance of another Scream-style rebirth. When did the category give up on the archetypal heroine? Why nowadays are they packing their films with insensitive idiots? It makes no sense. There’s a scene about halfway through that involves a homeless person and a telephone. It’s about five-minutes long, stupid and takes the plot absolutely nowhere. This can’t just be blamed on padding either, because at 97 minutes, the film is the slasher

equivalent of a soccer match, extra-time, penalties and another soccer match straight after.

It also suffers from infuriating lighting issues. The killer looks absolutely awesome, but most of the time, it’s very difficult to see him. So much so that I was really struggling to get a screen snap for this review. Most of the murders are off-screen, which I think has more to do with funding than anything else and the film hints at a twist that never really materialises.

So with those nags out of the way, why have I given The Stitcher a two-star rating instead of the one that I have made it look like it deserves? Well, because when Darla takes her concentration away from the humour, things begin to fall into place. The last twenty minutes or so are absolutely terrific and the momentum switches from let’s go to sleep to let’s rock and roll. There’s some real tension on display and even if generally the acting sucks, the last two do a pretty good job at keeping things rolling. What is worth noting is the fact that if you were under the illusion that Darla may be a raving feminist with a fear of exploiting her sex, then you will be in for a shock. There’s a huge amount of bikinis to up the eye candy factor, a mega MEGA hottie and various lingering cleavage shots. It’s also interesting that all the female personas are quite weak and conveyed as being scared of their own shadows. The strongest of the intended victims is a tough homosexual dude, who turns out to be a pretty cool hero.

Darla knows how to satisfy a stalk and slash audience and has no qualms with the traditional exploitive trappings.

Despite the omnibus in length runtime, I never got too bored watching The Stitcher. There’s some fun to be had on occasion and it all ends on a high note. I notice that Enlow hasn’t made a feature for a while, which is a shame because in a sub-genre that’s mainly populated with guys, a feminine touch is one that I welcome. There’s a blooper real included on the disc and its clear that the cast and crew had an absolute ball during production and you can feel the good time vibe whilst watching. I like the fact that there’s filmmakers like this out there that scrape together some funds and continue to populate our beloved grouping. Slasher enthusiasts may enjoy the decent bogeyman, a competent finale and a really authentic ‘psycho back story’, but real cinema connoisseurs will have a field day ripping the lesser moments to shreds.

Whether you take it up or not is dependent on your bad movie tolerance levels.

*Big thanks to Steve mi amigo for helping me to track these movies down. 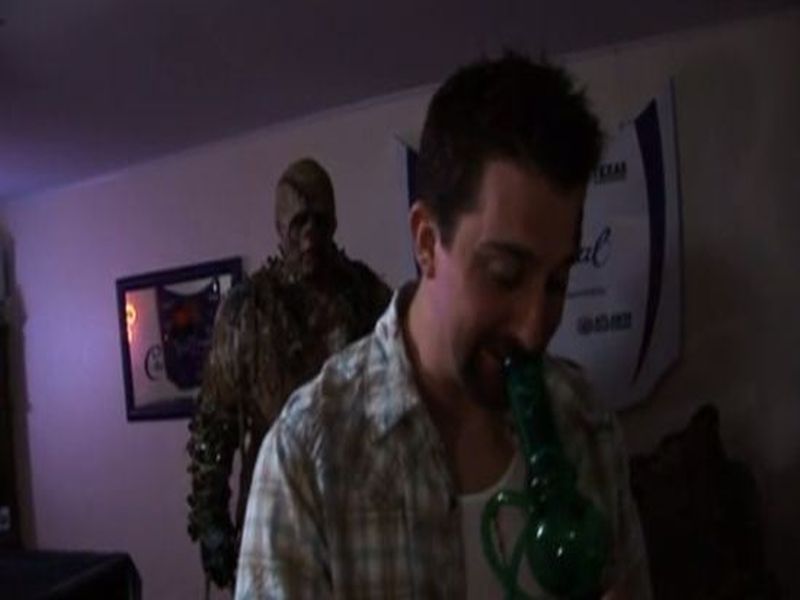