Most likely To Die 2015 Review

For me, the biggest mystery surrounding the slasher genre is how such a basic and straight forward formula has resulted in so few genuinely credible motion pictures. Of the 800 or so entries that have

been produced, you can count the truly outstanding ones on your fingers.  For movie watchers that aren’t slasherholics, there seems to be a thin middle ground and these flicks are either superb or trash-can worthy. It’s hard to pinpoint the exact reasons why the category hosts so few exquisite inclusions, but I think a big part of it is that filmmakers often try to expand on the traditional template when there’s really no need to.

Most Likely to Die is refreshing because it’s a big(ger) budgeted effort that proves that you can still make a sharp and thoroughly entertaining movie by sticking to the guidelines. Instead of flamboyant recalibration of the nuts and bolts, Anthony DiBlasi has decided to polish the old ones and paint them in chrome – and it works

A group of youngsters arrange a get-together at the remote mansion of one of their friends to celebrate the ten-year anniversary of their graduation. As they begin to arrive, they notice that Ray – the house owner and a professional hockey player – is mysteriously absent. Still, they begin to catch-up on their achievements and celebrate their reunion. Little do they know that a brutal

When I first learned that DiBlasi was making a slasher movie I was extremely keen to see the net result because he’s a director that I have a lot of respect for. His previous features have shown a unique flair for mixing horror with strongly developed characters and I wondered how he’d get on with the more basic trappings of a stalk and slash flick. If there were any lingering doubts about his potential as a competent up and comer, he washes them away with MLTD, by staying true to the category’s principles without betraying his own vision. The film offers a wealth of intriguing set-ups that allow its players to transcend the usual stereotypes and this is most-evident in the choice of final girl; – a professional poker player with a self-destructive lack of trust. At first I wrote a note that the friendships looked unconvincing, but as the film progresses, we are given more insight on the complex relationships that exist between the former classmates and why some of them may have

the motive to kill. Whilst I wouldn’t say that the mystery is outstanding or that the conclusion was a shock (it is in fact fairly underwhelming), it does add an extra layer to the tension of the marauding killer.

DiBlasi is wise to pay tribute to the slashers of old without making it obvious that he’s doing so. The film can be described as a mix of Terror Train, Pranks and Slaughter High, but it doesn’t attempt to hide the fact that it’s been filmed in 2015. We get a host of gimmicks that we’ll recognise from the classics including the killer putting a red X over the yearbook pictures of his victims and a subtle sub-plot of a prank that backfired. In time-honoured tradition, the opening scene includes a chase sequence and a (surprisingly) bloodless slaughter, but we don’t get to witness the antagonist for quite a while after. The in-between parts are spent unraveling the personalities of the school friends and there’s some interesting tweaks that bring them to life. What I liked about MLTD is that it breaks away from the ‘one by one they wander off to die’ chestnut, because the entire group are made aware fairly early that there’s an uninvited guest on site. This means that the script needs to be more creative in the way it strands its

victims and puts them at the peril of their pursuer.

Our antagonist has a unique guise and he strikes with a ferocious brutality. There’s a really well set-up scene in an alleyway that provides suspense as the maniacal menace closes in on a trapped victim, smashing lightbulbs along the way, like we saw in both My Bloody Valentine and Terror Train. It would be an extreme exaggeration to call this a gore film, but there are some gruesome moments and an audacious kill with a hockey stick that’ll satisfy blood hounds. DiBlasi directs with confidence and draws pitch-perfect performances from an inexperienced cast. His choice of lighting for the second half of the picture is perfect and he delivers a vibrant combination of audio that hits more

often than misses. Using the English National anthem for a kill scene was a masterstroke that I’m surprised didn’t come with an explanation of kind.

The lengthy attempts at dramatising the key players may be off-putting to those looking for a fast-paced slasher flick. It could also be said that the killings aren’t graphic enough for hardcore hounds, but you’d have to be hyper-critical to truly find much more fault with Most Likely To Die. Here we have a movie from a production team that made the right decisions: don’t waste budget on non-essential ingredients when all you really need is competent actors, a cool killer guise, some blood and a director with the ambition to succeed. Sometimes doing the basics to the best of your ability outshines an overload of creativity. This may not be a genre-defining movie, but it’s a worthy inclusion that should be a lesson to filmmakers looking to continue the legacy. 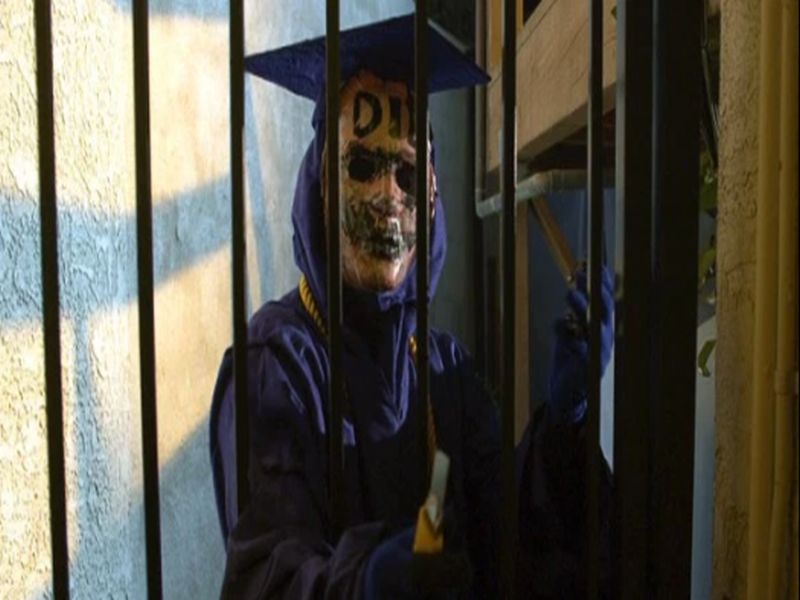