The House Where Death Lives 1981 Review

The House Where Death Lives 1981 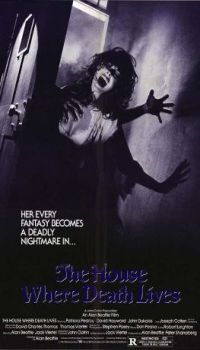 I must admit that I treat this movie somewhat unfairly. Many times I have written about the first slasher flicks that I came across is in my local video stores in Spain, before I left the country after the break-up of my parents. I never

have named this one, even if it was one of the first I found under the title of Delusion in España. In the UK, I found the VIPCO VHS under the the name of this review. I refreshed my memory by revisiting it and I even started a review back then for the IMDB, but I never got around to finishing it. That must’ve been around 2002. I bought an NTSC copy of the movie and it was that VHS I watched anoche. Despite suffering amnesia in the accident I told you about in my review of Paranoid, I could clearly remember watching this one and my opinion of it.

One of the main things that initially caught my eye about the UK release was the inexplicable and nonsensical moniker of the feature that made not a lick of sense to the junior me. How can ‘death’ ‘live’ in a house? Think about it: The

house where death lives. If you’re alive and living somewhere, then you’re not dead, so how can death live anywhere, let alone in a house? During my first view, I awaited patiently for the first reanimated corpse so the name would seem logical, but of course, such a thing never happened. THWDT is certainly a stalk and slash movie and it was released during the peak year of 1981. Thing is though, if you take an entry like Friday the 13th and compare it with this, the differences are astounding. The two are about as contrasting as a pet cat and a smilodon, so how is it possible that they’re in the same sub-genre? Well, allow me to explain…

A nurse named Meredith Stone goes to a house to care for a crippled old millionaire. She is soon joined by the gentleman’s 16 year-old grandson, Gabriel. As soon as the teenager arrives, someone begins killing off the house members and it becomes apparent a vicious maniac is on the property…

the slasher rule book, one is pure popcorn ‘jolt’ horror and this is more of a pseudo psychological tale that’s quite involving. Whereas Sean S Cunningham’s entry moved at a fast pace and went for a few bloody deaths, Alan Beattie’s thriller is gradual moving and rather drawn out in what moods it aims for. Whilst watching initially, I was reminded of The Silent Scream from 1979, which had a similar set-up and ended up being a fantastic project. THWDL couldn’t maintain the same momentum and it never gained the correct velocity. It’s also extremely anaemic too and there’s barely any shots of blood throughout the entire runtime. It was released in the United Kingdom as a 15 certificate, which confirms its bloodless visuals. Don’t let that put you off though, because even if there’s no goo on display, the murders are extremely brutal and there’s a couple of really tense jolts throughout the runtime. It’s quite atmospheric overall and boasts a really

creepy score, but it’s not particularly scary or a film that you’d watch on a date.

The story concentrates purely on the mystery and it certainly owes more to Christie than Carpenter in that sense. It’s a very engrossing puzzle to guess who’s wiping out the residents, but people that are experienced at guessing whodunits like myself, will read the clues and work it out within 45 minutes. When the killer is revealed, it’s a smart choice from the screenwriter, but hard to picture after the final credits have rolled. Without giving anything away, it somehow didn’t seem physically possible that the maniac would be able to do it, but there is a visual example that looks really good and convincing. It still doesn’t sit right with me somehow.

Interestingly enough, the marketing media for the USA cinema run gave away the killer’s identity on the posters. If you went to see the movie and became engrossed in the conundrum, you’d know exactly who it was by remembering the advertisement.

Alan Beattie seemed to have the modus operendai to ‘wow’ them in the end with a big, shocking twist. The obvious problem with that methodology is that I predicted the revelation and so, the climax felt almost like having to pay twice for only one meal. Everything had really built up to the unmasking, but it was lessened for me, because I guessed what would happen. Along the way though, various interesting areas are explored, including Meredith being sexually attracted to a sixteen year-old boy. This is quite a strange story-branch and even if one-six is not an age that’s illegal, Meredith was much older and my hatred of paedophilia made it uncomfortable to watch. It’s really hard to work out what the director was going for with that idea, but go there he does, including a sex

scene. No skin is visible and there was no boob shots in this film, which is unusual as that’s a slasher key ingredient. This was, in fact, an older cast in many ways than the norm, because most of the characters were elderly and even the sixteen-year-old was played by a man who was twenty-two. No screaming teens here. No hot chicas either, although Patricia Percy is beautiful, if you’re a man that doesn’t need big boobs like I do.

The director shoots the scenes comfortably and it’s bizarre that he only had one more directorial credit inside him following this release. There’s some really neat cinematography and THWDL certainly looks well financed. Also worth

mentioning are some fabulous performances throughout the cast including Joseph Cotton as the cripple. Patricia Percy from Squirm was fine as the protagonist nurse. She’s not a bad actress, but her performance was kind of like a zombie and she doesn’t boast a strong presence on the screen. I was impressed with her physicality in the last couple of scenes and she never came across as unconvincing in a dramatic sense. I prefer actors that dominate the visuals, which she never achieved, often being outshone by others.

As I said, The house where death lives is definitely a slasher movie, but it’s atypical of the rest of its brothers and sisters released around the same time. It is extremely snail paced and some may find It a battle to stay engaged and focused. It takes a while for the killings to start, but they’re quite aggressive when they happen and the killer utilises a

table-leg as his tool for slaughter. I’m not really sure if I can recommend THWDL, because it is lento (slow) in a major way. If you’re looking for a mystery though, you’d find a lot worse on the shelves and 8 is not a small body count. One problem I had with the film is that the busty beauty on the cover doesn’t appear in the movie even once! She was better looking than every other girl throughout the runtime kurwa! A well made psychodrama that is also a slasher, but a bloodless and not a fun-party one 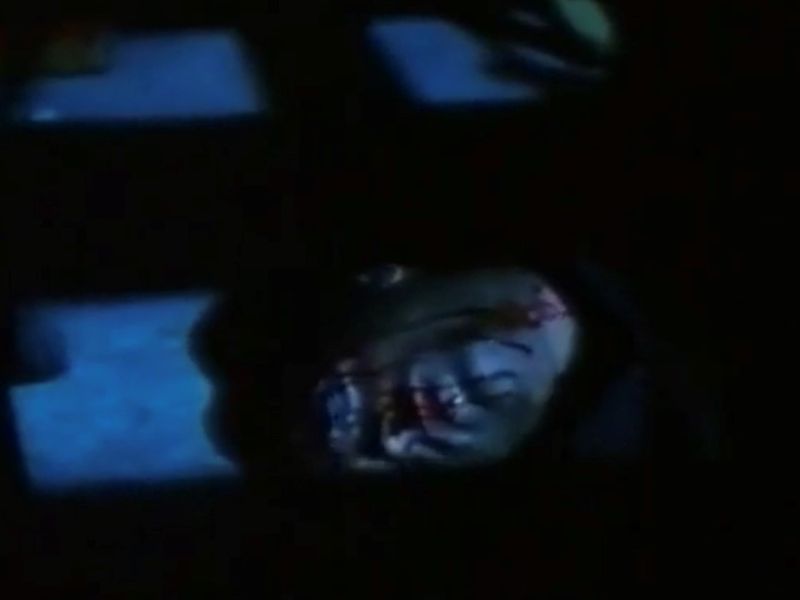