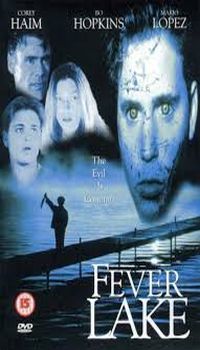 Imagine being the director behind the worst slasher movie ever made. Now no doubt in terms of technical application and production values,

there are far poorer entries to be uncovered, but Bloody Murder from the year 2000 has long been widely regarded as the weakest addition to the stalk and slash cycle. There are a couple of reasons as to why this is the case. Firstly, it received quite a solid distribution deal, which meant that it was seen a lot more than most of the DTV monstrosities that have littered the genre. Secondly – and in effect most importantly – it is without doubt a turgid excuse for a scary movie experience.

Prior to its release though, director Ralph Portillo already had a stab at the stalk and slash grouping with Fever Lake, a virtually forgotten addition that slightly pre-dates Wes Craven’s Scream. Whilst I can admit that I wasn’t overly excited about seeing it again for this review, I carried the hope that I may find something that I missed all those years ago.

Six school friends head off to a remote lake on a fishing trip for a weekend’s break. Upon arrival they learn the legend of an evil spirit that emerges from the depths and causes unrest amongst local wildlife and human inhabitants. After a young girl is butchered by a wolf, the natives believe that the evil has returned…

Due to a flagrantly ripped off opening scene that sees an axe-clenching father stalk his wife and child through a similar looking house, Lake has been branded some places as a teen-slash imitation of The Shining. The methodology of Stanley Kubrick’s masterful picture was to spend a length of time with the characters and develop a successful tone of dread that built up the moments of horror exceptionally. Portillo’s flick also lets its players dominate the majority of the plot, only this time around it results in an overwhelming feeling of frustration and boredom.  This is mainly because we have a story that’s as exciting as being kept on hold to customer service, and it’s been populated with personalities that are as intriguing as an empty cereal packet. Around the fifty-minute mark, I asked my Mrs if she knew the name or a noteworthy detail of anyone that had

appeared on the screen up to that point. I waited thirty-seconds or so for a response and then realised that she had fallen asleep.

Now I understand and appreciate a director that can build an underlying apprehension that explodes into a crescendo at the conclusion of a feature. I also recognise that this is by no means an easy feat to accomplish. What confused me most about this though was that it looked to have been put together by a crash test dummy. If Halloween acts as an example of a film that’s been produced with a complete understanding of horror as an experience, Fever Lake is its mirror reflection. We are only made aware that there is a threat lurking around the location by the repetition of identical dialogue by a ‘Native American’ that’s played by a white man(?) and adds absolutely *nothing* else to the story. He and other members of the townsfolk (including inept sheriff of the year award winner Bo Hopkins) talk of an evil spirit that lurks in the lake, but there is nothing that demonstrates this visually. Instead we get suspense music at the dumbest of times, like when the teens are discussing what to have for dinner(?). Well over an hour is spent with the cast involved in breakneck moments of tedium that include: going fishing, chatting about uninteresting crap and running out of petrol. Every now and then we cut back to the aforementioned American Indian who reiterates those lines he said five-minutes

ago and it all merges into a steaming pile of nada.

When the killer finally turns up 72 minutes later, the momentum tightens slightly before one embarrassing twist leads to an incomprehensible one and it all fades to black. I have reviewed many slasher films that have been over-padded by 15 minutes and should have been trimmed down to give their runtime a smoother flow. A whopping forty-five could be removed from Lake though and it would still make an incredibly boring short. There’s no slasher action for the first hour and everything else that happens is delivered so leisurely and with such ineptitude that it’s a real challenge to

keep your eyes locked on the screen. One false scare was so bad that I felt shame for the filmmakers, but my sympathy was turned to anger when I saw that they’d tried to do the exact same thing again at the conclusion.

I have no idea what Portillo was thinking when he made this film and I don’t know why he even bothered. It’s easier to give credit to someone who has tried and failed than it is when you can’t see any logic in an attempt or its delivery. Fever Lake is absolute rubbish and is perhaps even worse than the more notorious film that it led to. Of course I will re-watch Bloody Murder and explore this in finer detail, but don’t expect the results of my analysis anytime soon. I need a break from Ralph Portillo. A considerable one to be honest.