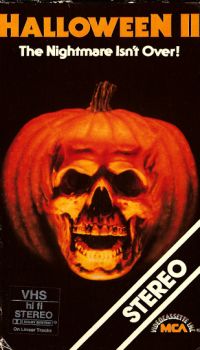 It was always going to be tough to follow up one of the greatest horror films of all time, no matter how good a filmmaker took the task.

Halloween had been a magnificent success across global markets, which meant that there was still power in the brand and intense pressure to put together a continuation. John Carpenter passed up the opportunity to direct a second time around, because he felt that a new vision would bring more ideas to the production. The job was handed to relative unknown, Rick Rosenthal, who showed the most positivity when auditioning. Carpenter stayed on as producer and also wrote the screenplay, which proves that he wasn’t ready to completely hand over the reins.

Since 1978, Terror Train, Prom Night and Friday the 13th had come the closest financially to matching Carpenter’s classic, but none of them had received the same respect from critics or audiences. Michael Myers was still the most fiercely terrifying antagonist to stalk and slash his way through the silver screen and there was little doubt that another entry to the series would be hugely popular amongst the buzzing horror crowd. In the end though, Rosenthal’s follow up failed to capture the enigma of its predecessor, despite a strong showing at box offices. It is not uncommon in cinema for a sequel to be weaker, but perhaps on this occasion it was due to the sheer weight of expectation. I decided to review Halloween II as if it were a stand-alone feature and ignore, where possible, connections to Carpenter’s classic. I was hopeful that this would allow me to overcome the disappointment that I have carried since first watching it almost eighteen-years ago.

After the events of the last movie, Laurie Strode is rushed to the hospital, leaving Dr. Sam Loomis to hunt the streets for Michael Myers.

Rosenthal’s slasher starts with an explosion of energy. The camera floats around the action to create the impression that we could actually be at the location watching it unfold. There’s a subtle buzz of tension to each and every scene of the initial manhunt and I was over the moon to be back amongst the Haddonfield streets that I know and love. Donald Pleasance, whose performance was vital the first time out, hams his way through some superb dialogue and lines like, “You don’t know what death is” really bring the opening to life. After a while, we transfer to the local hospital, which becomes the main backdrop for the rest of the runtime. As more characters are introduced, the pace drops a bit and it’s left up to Carpenter’s rehash of his notorious score to keep the chills pulsating.

It’s in the mid-section that Rick Rosenthal shows what differentiates him from Carpenter. There are various attempts at shocks (most notably an awful false cat scare), but they feel far more laboured than they have when seen in other places. Carpenter himself had seen the effect that his seminal picture had made upon movie trends and was aware that imitators were using more visceral ways to clip young victims. He later went back and shot gore scenes, which he added to the murders after the shoot and Rosenthal blamed those for ‘disrupting the film’s momentum’. Whilst this underlines my feelings that Carpenter wasn’t fully prepared to let go of his baby, it’s somewhat harsh of Rosenthal to highlight this as a

cause for the diluted fear factor. With that said, he did at least pull off one or two credible set pieces and the build up to the ‘hot tub’ murder is perfect in its delivery.

The director does save the best for last and when Michael finally discovers Laurie Strode, the simmering apprehension comes to an almighty boil. Due to her injuries and the painkillers that she’s been given, Strode is even less battle-ready than she was last time around. There’s suspense delivered in a superb chase sequence through a basement and Jamie Leigh Curtis is at her scream queen best for these moments. I still don’t feel comfortable with the revelation that she’s Michael’s sister, but I guess that John Carpenter was taking something back from the countless titles that had taken from him. Family connections had been key in most slashers that followed in the wake of Halloween (Prom Night, Friday the 13th, Bloody

Moon etc) and I’m sure that this was something that he had noted.

I liked the way that that they finally ‘stopped’ the boogeyman and it feels like the story had come full circle. The shot of him emerging from the flames reminded me just how much even a great film like The Terminator had been inspired by these movies (including the duplicate of that scene, antagonist POV shots, the way Arnie sits up, the have sex and die

Was Halloween a movie that needed a sequel? Quite frankly, no; but taken as a stand alone, this is a SLASH above many others. In the years that followed, Rosenthal had one good movie left in him, Bad Boys with Sean Penn, but he never found the breaks thereafter. Whether he was the right choice here is all up for debate, but I must admit that I preferred his TV ‘director’s cut’ of the two available versions.

After watching with a mind clear of comparisons, I can comfortably state that Halloween II is an extremely good slasher film. Rosenthal’s gimmicks, like the cuts to the CCTV footage of Michael stalking, are a nice addition and aside from an uneven pace, there’s really not much here to criticise.