This is another total obscurity that I received in the post a few years back, but I’ve never got around to actually

watching. I’ve been trying to review Camp Blood for a SLASH above since the start of the year, but I can’t locate my copy anywhere. Desperate to post a newish killer in the woods flick for y’all, I thought that I’d finally take the plunge and give this a viewing. Killer Campout is budget filmmaking at the lowest possible level, so there’s little more in terms of production value than a camcorder and an industrial sized container of corn syrup. I know that doesn’t

sound like the most attractive prospect, but if I’m going to cover the entire genre, then I’ll have to sit through some of these from time to time.

It came from Victor D’Agostino (under the pseudonym Victor Franko) who had been working as an extra and picking up experience around the film industry since 2002. Amongst other things, he had assisted B-Movie director Jay Woelfel on the production of both Ghost Lake and Demonicus before finally getting the funds together to make his own slasher extravaganza three-years later. He hired locals and buddies to fill up the cast list and filmed it at a site that he knew extremely well.

Seven kids head off on a camping trip into some secluded woodland to smoke pot and make-out for a weekend. The forest is host to an urban legend of a monster of some kind that kills invaders of his domain. Before long, they soon

discover this to be true, as a burlap sack sporting maniac begins to slash his way through them.

It would be foolish to have high expectations for a movie that cost $500 to produce, but prepare to be shocked señoras y señores, because Killer Campout is a real gem for the money that was put into it. What we have here is a tribute to Friday the 13th thaat pays homage in the best possible way and offers much more of a knowing nod than the likes of Blood Reaper managed. The killer looks splendid in a black burlap sack and traditional Killer in the Woods lumberjack get-up and he stalks with the kind of physically imposing frame that made Jason so memorable. D’Agostino didn’t have the budget to cast someone to play the maniac, so instead he performed the role himself. He really gave life to the hulking slayer, which may well have been due to his previous acting experience. A fine example of this is during the pulsating chase sequence in the closing minutes, where the final girl is pursued after she has sprained her ankle. Our bogeyman has a traditional slow-footed Michael Myers stalk, which means that her injury makes them equally paced and it generates some solid suspense. In another scene, the killer towers over the same cowering female after murdering one of her colleagues. She sits dumbfounded and in a state of shock and it’s one of those moments that makes you scream at the screen, “Get up and run for Gawd’s

sake!” It was great to see the director transcending his budget in an effort to give us as thrilling a ride as possible.

The feature clocks in at fifty-four minutes, which doesn’t leave a great deal of time for character development, but the lightweight script still managed to chuck in some memorable gimmicks. These include a hilarious shoplifting skit and some wacky weed-smoking references that are delivered by a pair of rouge-ish chicks that are there to add a dose of humour. I was incredibly impressed with seventeen-year-old Jillian Swanson’s portrayal of the heroine, because with minimal dialogue and screen-time, she gave us a charming and approachable final girl. Her career blossomed for a couple of years after this and she appeared in a few other horror pictures, but she’s been missing since 2007, so I’m guessing that she’s given up on acting, which is a shame. Along with the energetic performances, I also found the gore effects to be worthy of credit, because they’ve pulled off some really effective visuals on shoelace funding. Amongst these was a

gruesome impalement and an outstanding head-lopping trick that proved that with the right camera angles and a sharp mind, a lack of funding doesn’t effect what you can achieve.

Despite some crisp photography that is as radiant as anything that I’ve seen in slasher cinema, nothing can overcome the obvious amateurism of the sound mixing and editing. It looks as if scenes were completed and given musical accompaniment before everything was chopped together, so we get a whole heap of moments when two separate scores that don’t really fit are amalgamated into

one set-piece. There are also times when the dialogue couldn’t be synced at the same times as the soundtrack for some unknown reason, which gives the audio an awkwardness that shows the film’s cheapness. They did make this work to their advantage in one place though, by giving the killer his own atmospheric POV that had a distinguished piece of music every time that he appeared on screen. It was a good way to make the best use of the budget restraints and its even something that they poked fun at later when the heroine grabbed a weapon during the conclusion.

I ask myself, did Victor D’Agonisto get what he could out of $500? The answer is as blatant a yes as a yes can possibly be. This is a very good entry that delivers far more thrills, Friday the 13th references and slasher fun than most of the films released recently on ten-times the expense. Whilst I admit that you need to be lenient in places, I think slasher fans will lap it up if they can find a copy. 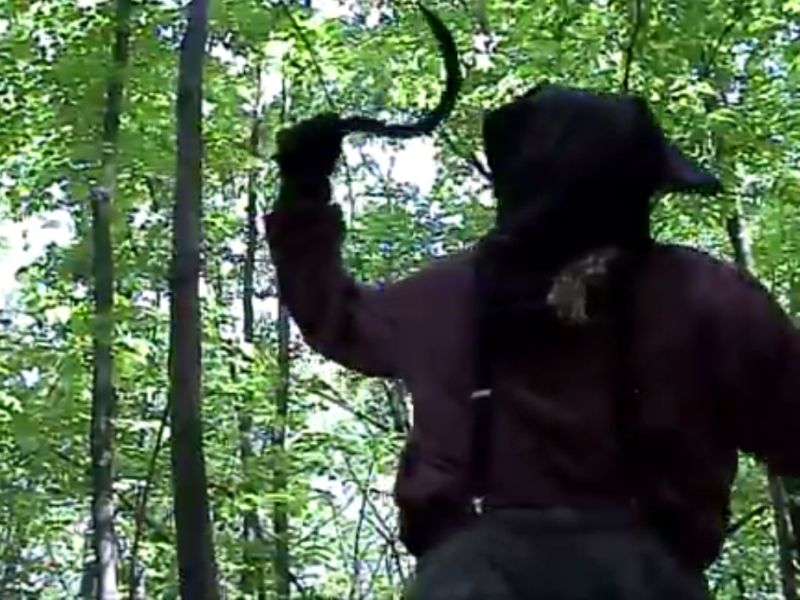