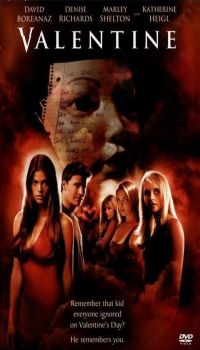 whilst others just called it brainless. Looking back, it was actually one of the better efforts that shamelessly jumped on the Scream bandwagon. Good enough to garner two sequels and it showed that the director knew how to build tension and had an eye for stylish photography.

For his return to the sub-genre he loved, Blanks put a popular cast together, including Denise Richards and David Boreanaz and went back to the roots of the slasher cycle’s trappings to terrorize an annual day of celebration. His choice was Valentine’s Day, the same that was (pick) axed in 1981 by director George Milhalka and his gas masked bogeyman, Harry Walden.

Despite its large fan base, the original My Bloody Valentine was not as successful as the producers had hoped for upon its initial release. It was only much later that the film really began to achieve its status as a slasher classic. The Special Edition disc that finally brought back the majority of the gore sequences was a fantastic moment for the genre and the film has acquired a new generation of followers.

hit screens, and I went to catch it at the cinema on its opening night. Despite not having any link to the aforementioned Canadian classic, I have often thought that the idea here was to at least pay homage to that film. Perhaps the original plan was to produce a remake, but in the end they just settled for a theme that was close instead. Aside from the obvious link that both stories take place on the same date, the psycho has an extremely similar calling card. It’s also worth noting that even though this claims to be an adaptation of Tom Savage’s novel, there’s little more than a few characters and a title that has been ported over from the book to the big screen. This aided my belief that they set out to modernise, albeit unofficially, one of the slasher category’s long standing fan favourites, My Bloody Valentine. Either way, I hoped that Blanks could at least manage to capture some of the vibe that was so prominent over at Valentine Bluffs back in 1981. If that was too much to ask, then duplicating the fun that he had with Urban Legend would be good enough for me…

It starts with a pre-teen valentine disco set in 1988. A bespectacled young boy heads on the dance floor looking for a young female to share a dance with. First he approaches Shelly (later played by Katherine Heigl) who embarrassingly rebuffs him. His charm doesn’t seem to work with Lilly (Jessica Cauffer), Paige (Denise Richards) or Kate (Marley Shelton) either; they all send him packing mercilessly. His luck changes when Dorothy (Jessica Capshaw) actually acknowledges him and the twosome leave hand in hand. They are later caught kissing under a bench by a gang of bullies. In order to save her own self from persecution, Dorothy accuses the youngster of attacking her and so the gang decides to take their own revenge. They cover him in red goo, strip him and chase him onto the dance floor where they proceed to beat him up. You already know that this kind of stuff usually turns someone in to a violent mass

Fast forward ten years and the girls have become women. No one is sure what happened to Jeremy (the unfortunate kid from the prologue) as he disappeared after that dance. It’s close to Valentine’s Day and they each receive a card signed with a poetic threat to their lives. They soon begin to take them seriously when Shelly is found with her throat sliced. Before long a mysterious masked madman stalks each of them leaving Kate and her boyfriend Adam (David Boreanaz) to work out that she’s next on the psycho’s list…

From the off, Valentine certainly looks the business. The healthy production values have been put to good use and the photography is sharp and confident in places. The director shows some real creativity in some of his twisting shots and I liked how he managed to keep the energy rampant for the first half an hour of the feature. At times, I really felt like I had been transported back to the eighties and I enjoyed the attempts to camp the tone up enough to align the film more closely with its stalk and slash forefathers. Parody is nothing new for these titles after Kevin Williamson’s screenplays, but

Blanks demonstrates a fondness for the category and has fun with the trademarks instead of mocking them.

We’ve got a cast of actors that have more experience than usual, but there’s no denying the fact that their attractiveness played a huge part in the success of their auditions. Denise Richards spends the majority of her screen-time pouting and posturing at the camera and even though she looks amazing, it quickly becomes obvious that her performance motivation for the role was something along the lines of, “Denise, just treat the camera like a pole in a strip club”. Sadly, if ever the phrase ‘looks aren’t everything’ could be applied specifically to a movie, then Valentine is that film. It lacks the fundamentals to back up the quality of the make-up and wardrobe department’s work on the faces and bodies of its stars. Fundamentals such as: momentum, intrigue, suspense and realism. It reminds me of those house plants that you see in Ikea that are made of plastic. They most certainly look the part, but in the end, they’re just a hollow decoration.

The murders are surprisingly weak and gore-free (perhaps an attempt to gain the most lenient rating possible), which may have worked for Halloween because John Carpenter used precision to make sure that each killing was extremely suspenseful. The problem here is that Jamie Blanks is no John Carpenter. There’s a chase sequence early on that was tight and brilliantly crafted, but the rest simply felt rushed and unplanned. The nut job does indeed look creepy in a cherub mask and the blood trickling from his nose after he dispatches each victim was a neat little touch. Nevertheless, there aren’t enough of those pleasing elements to add up to a satisfying whole and mostly Valentine

Another problem is that the characters are incomprehensibly self indulgent and morally extracted and it’s simply impossible for them to win over the audience. I know that the story demanded some narcissism from its players, but I still needed someone to root for, you know? Donna Powers’ screenplay was lacking a central character that we could relate to and it really left a heart-candy sized hole in the runtime. What’s wrong with a ‘shy reclusive’ type of final girl? I truly believe that the Laurie Strode style of protagonist was perhaps one of the most successful things about early stalk and slash entries. In fairness, much like the amusing Shallow Hal from a few years later, the film does try to convey a deep rooted message about our current obsession with image. It’s a poorly delivered social commentary though and the point is never made with any class or strength.

Jamie Blanks proved last time out that he has what it takes to be a decent filmmaker. I would consider his second attempt to be a step-backwards however and it may be beautiful based on the appearance of its stars, but it hideous and ugly inside. There are some very good elements (the killer was mega creepy), but as a whole it can’t escape its overall feeling of, well, nothingness. It’s a shame that he couldn’t have made more of the talented cast and a competent budget; but in the end, Valentine just feels like a bottle of vodka on a stag night – totally empty. This mystery aspect and the ‘twist’ just

about worked when I saw this in the cinema. So what do Warner Bros go and do? Well they ruined it for home video fans by giving away the killer’s identity on the back cover.