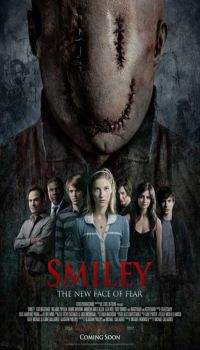 Those of you that are connected to the a SLASH above Facebook page may recall that recently I mentioned that I’d been invited to an early showing of the new horror film, Smiley. As it was in the

US, I thought nothing of it until as luck would have it I had to fly out there on business. Not being one that’s scared of a few hours on a train as long as I have my trusty iPad, I

took a slight detour and managed to catch it on the big screen.

I was born in 1981, so I never got the chance to see a slasher movie ‘live’ during the post-Halloween heyday. When Scream came out, I was fifteen years old and despite already being a massive collector on VHS, I missed out on that one too due to being caught up in teenage shenanigans. I have tried to make up for it as much as possible by attending almost every new release that gets a showtime in the UK or Europe since. I guess that the best experience that I have had so far was being one of the first to see the My Bloody Valentine remake in 3D. I blagged myself tickets to a pre-screener three-days before it showed nationally in the UK and if you search the web, you can probably still find my extremely positive review. You know what? I will have to look for it myself, take a second viewing of the film and post the update here.

I remember thinking then that the stalk and slash cycle was going to bounce back once again from the dead, just as it did in 1996. That didn’t quite happen though, so I’m

always hopeful that the next picture that I witness in the cinema will be the one that awakens the slasher genre from its slumber. I read a few reports on Smiley whilst it was being produced and from what information I could gather, it looked to be fairly well-budgeted with a good idea for a plot. Me being me, I couldn’t help but think, ‘You know what? Maybe this time…

A young girl leaves her family home for the first time to go to college. Once she arrives, she is invited to a party, where she comes across the urban legend of a sadistic killer.

Rumour has it that if you type, ‘I did it for the lulz’, on an Internet chat room three times, a masked maniac will slaughter the person that you are talking to. Most of the kids laugh at the story and think that the webcam videos floating around are phoney. Ashley feels differently however and under pressure from her friend, she decides to try it out for herself. When the guy that she’s speaking to gets stabbed by a masked loon, suddenly fear settles in. Soon local kids begin disappearing and it looks like the youngster is next on the killer’s list..

I looked this up on the IMDB just now and it already has a score of 3.3. Just to put that in perspective, it shares a ranking on the world’s largest Internet movie site with Camp Blood. Think about that for a second and I’ll try to explain to you what I made of it.

When the second phase of slasher domination kicked off during the nineties, it was all about crossbreeding the style that we knew so well with something that had been tried

before, but never taken to its maximum potential: satire. Kevin Williamson’s screenplay was sharp, witty and smart. When it was mixed with Craven’s experience and technical flair, the combination was highly successful and both critics and audiences swooned. You can’t knock Michael Gallagher for trying to mix two different cinematic tones in an attempt to reach a similar novel juxtaposition. Smiley does have a masked killer, a sensitive heroine, teenage victims and a shade of mystery to the maniac’s motive and identity. The plot here goes for a more psychological slant though and therefore sacrifices the opportunity for action scenes.

What do you expect when you sit down to watch a slasher film? Blood, suspense, nudity, gore, fun? None of those are the strongest points of Gallagher’s story and his movie tries to say so much that

the real point gets lost somewhere amongst the crossroads of loose sub-plots. Is this a character study on a protagonist that’s emotionally vulnerable? Is it a social commentary on the effects of Internet trolling? Or is it just an ambitious slasher movie with a heavily flawed screenplay? I couldn’t really get my head around it and maybe I need to watch the film again when the DVD is released. What I did notice was

that the dialogue really wants to come across as intellectual and instead it seems too desperate to impress. You want to sit down with me and talk philosophy? Great; pull up a chair and let’s begin. Do you want to do it whilst we’re watching a slasher film? No, of course you don’t. Gallagher’s ideas should not not in a million years have been included in a film of this kind. Also if you are looking to give your audience some examples of your intelligence, it may be better not to make the catchphrase of your movie, ‘I did it for the lulz’. Saying ‘Candyman’ three times is creepy, shouting ‘Madman Marz’ above a whisper is ominous. Typing ‘I did it for the lulz’ on MSN is plain stupid.

In honesty, I didn’t think that Smiley was as bad as it has been made out to be. It includes a lot of effective jump scares, a great performance from Roger Bart and a decent guise for its bogeyman.

Actually it reminded me a bit of the mask that the maniac wore in the late nineties serial killer flick, Resurrection. There’s the usual amount of teen eye candy for both the guys and slasherettes and

did anyone else notice that that Melanie Papalia looked a bit like Penélope Cruz? There’s a couple of attempts at suspense, but I guess that the main problem with a story that needs us to see murders over webcam is that it eradicates the chance of lengthy stalking sequences. This made it harder for Gallagher to develop a taut atmosphere.

The final ‘twist’ is a massive gamble that unfortunately doesn’t pay off. I really don’t want to reveal it, because you definitely won’t enjoy the film if you already know. I kind of had a feeling that it would end that way, so probably you will too. The majority of the people in the audience and especially the one that I saw it with were totally dissatisfied. Probably because the story was convoluted

and leaves too many holes that weren’t filled.

Should you go and see Smiley at the cinema? I think it depends on the amount of spare time you have available and your budget restraints. If you chose it as your Saturday night feature after a hard week’s work and pay for premier seats, you might be disappointed. I wasn’t, because I quite liked the incorporation of pseudoscience in to the plot,

the intriguing dialogue and the expressive ideas. Those looking for a typical dose of teenie kill cheese will not find their filling here.

This is most definitely not gonna re-launch the slasher film and I guess that  I was most hopeful for that outcome. Instead it seems to have done the complete opposite and ironically, lines of Internet trolls have taken to social media sites and online forums to bash this movie. Whilst I feel that it is somewhat undeserving of such hatred, there’s no doubt in my mind that a huge opportunity has been missed.