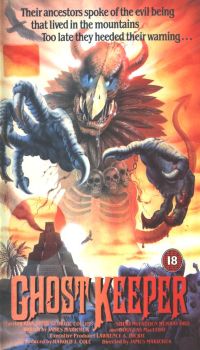 Ghostkeeper was one of the many of films that I collected during my searches of video stores in the eighties/early nineties. Back then I was a slasher fan, but would also pick up any horror movies that I came across and take them home with me to add to the growing stack in my room. It was released on the Apex label in the UK. They should be known to horror aficionados of the 30+ age bracket

because they won the rights to a plethora of titles. These included the likes of Dawn of the Mummy, Nights of Terror, House of Evil, Don’t Go in the House and even Evilspeak and Mausoleum under another sub-brand (Horror Classics).

Apex were one of the most outlandish VHS distributors in Britain, because their covers rarely had anything to do with the features inside. Here we have another fine example of this, because as you can see by the picture above, they have marketed this snow-coated hotel-based semi-slasher with a large demon-like clawed figure towering over a sun scorched desert!

I got the chance to speak briefly with director Jim Makichuk, who confirmed that he hadn’t set out to make a slasher movie in the traditional sense. The initial plan was to produce a supernatural thriller based around the legend of the Wendigo, but the script was never completed due to the budget running out halfway through. He was left with two choices: pack up and go home or finish the shoot with what

minuscule money that they had left in the pot. Due to this, the second part of the feature was put together spontaneously, with scenes being written literally on a day to day basis. The net result is an unique obscurity that

does include a few of the slasher genre’s trademarks.

The Wendigo (spelt here as Windigio) is a superb antagonist for a horror film. Found mostly in ancient legends of the Algonquin people, it is described as a violent cannibalistic spirit that can either appear as a demonic cryptid-like creature or in human form due to its ability to possess victims through their dreams. Those who indulged in cannibalism were at the highest risk of its wrath and the stories were most likely circled as a warning to prevent the attacks of tribal carnivores.

The plot seems to focus more on ‘Wendigo psychosis’, which scriptures describe as a rare disease that gave sufferers an intense yearning to eat human flesh. These people would in effect become

monsters, stuck in a trance-like state who would be kept in ties and tortured or used for medicinal experiments. Although the disorder is rarely mentioned in recent times, it can be discovered in Native American folklore.

A group of three friends are out in the snowy Canadian Rockies to celebrate New Years Eve. When one of their snowmobiles breaks down, they come across a hotel and decide to see if they can stay for the night. As darkness sets, they soon become aware that they are not alone…

It’s a tough job to describe the quality of Ghostkeeper without you first understanding its lack of cinematic ingredients. We meet just seven characters in the whole picture (five are spoken) and we are

limited to only one location. There’s minimal blood, no central bogeyman and an incoherent storyline to carry us through. But despite having very little at his disposal, Makichuk has created an unsettling and eerie horror film with an abundance of gothic atmosphere. The only other feature that had achieved such a feat from that period was 1980’s The Shining; -a title that this is often accused of imitating. Whether that be true or not, Makichuk did admit that he was inspired by John Carpenter’s Halloween. It’s not as obvious here as it was in almost every other film that was released in the early eighties, but still the nods can be felt in places.

‘Keeper works due to a few elements blending successfully together in an unlikely combination. The stunning snow coated backdrops for the old hotel help to build the claustrophobia and once inside and under shelter, the gloomy corridors and spooky décor add to the feeling of impending doom. John Holbrook’s tight cinematography is perfect for the mood and Makichuk is a director that gives his

characters fascinating depths that are evident but not overtly obvious. The lead, or ‘Final Girl’, is immersed in a mentality that makes you question her sanity and the conclusion offers a neat ambiguity. Her ‘boyfriend’ gives new meaning to the word bastard and his psychological bullying and humiliation of his partner is awkward to watch. Whilst the ending may not be ‘open’ in the normal sense, it is left somewhat up to the imagination to define. I prefer to believe that Jenny slowly went mad and imagined most of what we see for the latter part of the story. This, however is only my opinion; and it’s one of many that can be drawn from the events that unfold throughout the feature. Most of the cast are amateurs with very little previous experience, but their performances are solid. They are eaten alive though by the sheer screen presence of Georgie Collins as ‘The Ghostkeeper’. In a portrayal

that brings to mind Kathy Bates’ Oscar winning turn from Misery, she captures and delivers the intrigue that the role required.

If the technique of those participants helped to dress everything together, then the film belongs without a shadow of a doubt to Paul Zaza’s glossy overcoat. This is quite comfortably the best of the composers work. In many parts, his haunting score alone carries the momentum and most of the atmosphere is built upon his crescendos. The crew must have been over the moon with his work and it really makes the film complete. Add on top of that some fine lighting and good use of sound and everything falls in to place.

So with what I said earlier about this not being a typical stalk and slash flick, what is there here for my regular readers? Well this is a good question. Despite not being a deliberate attempt at slashertastic classification, I really can’t see Ghostkeeper being grouped anywhere else. There is a chainsaw wielding maniac, a gooey sliced throat and a knife murder, which tick the right boxes. Whether these

trappings were in the original script or not will never be known for sure. It’s also worth noting that almost every review that I have read call this a slasher movie and even the grand old daddy of horror websites, Terror Trap, classify it amongst our favourite cinematic style. What I think will attract a SLASH above readers most is the stylish environment, which brings to mind titles like Curtains and the creepiness of Halloween. It’s also worth noting that the distributors had their own idea of what audience they were targeting. A few versions can be

found with an opening shot that is most definitely screaming out to the Friday the 13th crowd. You can see it in the video above. Now this wasn’t filmed by Makichuk, despite it being on the same location, which makes it even more intriguing.

The good news is that the Ghostkeeper story is not over… yet. I have seen a proposal for a sequel, which could be shot as soon as the team secure funding. Quite a few filmmakers check out a SLASH above, so drop me a line for more information if you may be interested in getting involved and I can put you in touch with the right people. This is most definitely a very good idea for a feature film. My Bloody Valentine 3D was a huge success and it began life as a draft script for a follow up to the original. The possibility of remaking another Canadian gem is one that I fully believe is worth exploring. Lionsgate, are you reading?

Although Ghostkeeper may not be a film for gore hounds and some may not be patient enough to allow the slow-boiling momentum to take hold, if you’re in the right mood then this truly is a cult classic. Check out Code Red’s DVD, which is available on their website now and transferred from a gleaming print that was recently discovered in New York. A very good obscurity that you really need to see…