Happy Birthday to Me 1981 Review 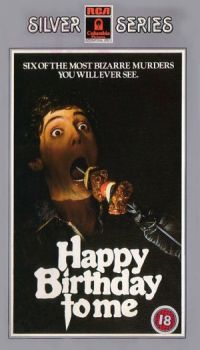 You could be instantly forgiven for expecting the obvious. I mean by the time this was released we’d already had Graduation Day, Halloween, My Bloody Valentine, Black Christmas, Friday the 13th, et al; so

what was left to terrorise in terms of notable calendar dates? Well hey; everyone has a birthday, right? Whereas the majority of titles that I’d mentioned were more or less clones of the buzzing slasher genre’s biggest hits, Happy Birthday to me stands apart. This is simply because it has enough wit and dare I say it, intelligence, to already display subtle self recognition.

Don’t get me wrong, this is no parody, but has enough in its rucksack to satisfy fans of thrillers, eighties retro and anyone who has popcorn and is looking for a damn good time.

Canada certainly held its own in terms of releases during the period’s golden age and if Prom Night, My Bloody Valentine and Terror Train don’t do enough to convince you, then Curtains or American Nightmare certainly should. It can be argued that in terms of credible output, the Canadians were slightly ahead of their neighbours when analysing the average quality of overall releases. We also can’t forget that John Dunning and Peter Simpson played huge parts in the cycle’s early successes. I spoke to the gorgeous and extremely talented Lesleh Donaldson who featured in this, Curtains and Funeral Home. She told me that she loved working on all of those pictures, but Birthday is probably her favourite.

The top ten students of Crawford Academy begin mysteriously disappearing. We see that they are being murdered by a black-gloved nut job. The question is, in such a close clique, who could have a motive to

Many dorm slashers mixed gruesome high-jinks with frat humour during the length of the period, but not many managed to merge the two opposing styles with the finesse of Happy Birthday to me. The strength of the performances here helps the plot to flow smoothly, and each character stands out without ever coming across as forced or overbearing.

John Saxton’s story focuses not only on developing its players, but also on sustaining its mystery and unlike the majority of genre entries that were painfully easy to solve, Birthday’s slick script delivers an outstanding puzzle. There are a few obvious red-herrings that’s are meant to be that way, but if you tell me that you managed to figure out the killer’s identity before he’s

been unmasked without assistance – then I’m sorry, but I find that hard to believe. There are a few slashers that have explosive revelations that you can notice big holes in when you think about them thereafter (Urban Legend?). Birthday on the other hand provides a tense knot of twists that make sense when unravelled.

From 1979 to 1983 there was a war raging. No, I’m not talking about the Cold War, Vietnam or outbreaks on the Gaza strip. This was the kind of stuff that the commandos in Kubrick’s Full Metal Jacket were talking about. It was the time of the battles to see who could come up with the most creative, gratuitous or bloody ways to kill someone on screen – otherwise known as ‘the gore wars‘! The teenage casualties were extremely high and an extensive campaign was broadcasted in box offices across the globe. Sororities, frat houses, summer camps and the like became the targets for numerous masked-killers and psychopaths. This regiment under the command of General J. Lee Thompson had a strategy to be the most

creative teen-killer of the conflict. Have you even seen someone killed with a Shish Kebab skew for example?

The murders here were indeed ingenious and what they lacked in suspense they made up for with sheer audacity. It was said that in order to keep the tone running throughout, the director threw gallons of blood everywhere during the shoot and these behind-the-scenes motivations must’ve made the production a dream to work on. Lesleh told me that when the crew were filming the Birthday party scene, which puts all of the previously killed character’s corpses around a table, she took a walk around Montreal with Richard Riberie at lunch time, whilst they were still in their full make-up. Imagine the stares that they received –- it must’ve been a blast! The main version of the film that you’ll buy from the shelves is an edited print, but I have seen the uncut bootleg, which adds about a minute in total (maybe a tad more) to all the killings. I thought the motorcycle and weightlifting

slaughters were very well done in their entirety and it’s a shame that they haven’t yet made it to DVD. We can only keep our fingers crossed in hope.

As I mentioned above, the quality of the dramatics is perhaps one of the strongest elements of the feature. It’s not that every actor gets a chance to show their full emotional range, but what they are asked to do, they do superbly and they’re all operating on the same wavelength, which helps no end with the chemistry that makes the characters come alive. Melissa Sue Anderson gets some MASSIVE scenes and she carries them off credibly, whilst only stumbling on the odd occasion. She was given a couple of tricky sequences and a lot of screen time to win

over the audience. It could have been tempting, perhaps, to play the role a whole lot straighter. In the end, she chose the right mix of moods to maintain the necessary intrigue.

There’s an incredibly good score that caused controversy for Sony when they released a new updated copy of the film in 2004. Some of the music had been replaced with new pieces, including the eerie piano piece from the opening. It came as a real disappointment for slasher fans that wanted the original in better quality but as they remembered it. The best available version of the feature deserves to be seen in the best possible format because it is so beautifully put together that it acts as a reminder from a time when slasher movies could command solid casts and bigger budgets. So what complaints do I have? Well none so bad that they affect my rating. You can’t really compare Birthday with Halloween as it offers a completely different vibe. I mean, sure this is a slasher movie, but it’s the Brazilian carnival of slasher movies – all wacky visuals and extreme levels of fun with more twists than a tower staircase.

I loved this cheeseball and it’s definitely in the all time top-ten.

* Massive thanks to Lesleh Donaldson for her help – what a lovely, warm person she is!.