aka Shiryō no wana 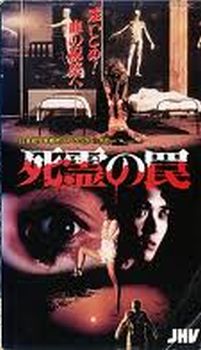 Back in 1988, The Ring’s Hideo Nakata had just graduated University and The Grudge’s Takashi Shimizu was only sixteen years old. Japanese

horror was still following the trends that were set by Western cinema and was rarely mentioned as a source for inspirational titles. That began to change with this humdinger of a genre entry, which I first discovered after reading a four-star write-up in Empire magazine a few years ago. The article had likened Evil Dead Trap to the work of Fulci, Argento and Carpenter and admittedly that made it sound almost too good to be true. I quickly managed to get my hands on a copy and was hopeful that it would live up to the hype

Nami is the host of an after-hours TV programme called ‘The late late show’, which plays blooper home movies to get a few quick laughs during the graveyard shift. One night she receives a package with the simple message `For Nami and those who don’t sleep’. Inside is a videotape, which shows a young girl getting mutilated by a scalpel and it ends with a threat that Nami is next. Instead of giving the tape to the authorities, she decides to go and investigate where it came from with some friends. When they arrive at a creepy location that they followed from the footage, they split up and search for clues. (Bad move!) As you’ve probably guessed, they’re not alone. A caped, masked psycho is watching them and begins killing them off one by one.

In many ways, Evil Dead Trap shames its European/American genre counterparts from this point in the cycle. Toshiharu Ikeda’s stylish direction delivers some supreme tension and creates a

genuinely macabre tone that becomes increasingly claustrophobic as the film progresses. The scenes where we see the mysterious killer dragging corpses into secluded corners or the brutality of that first gruesome slaying, build a strong aura of uneasiness that reaches heights we don’t climb often enough. Ikeda makes excellent use of the menacing location, especially in the darkness where his creativity really shines. I enjoyed the scene where the assassin’s disguise is illuminated only by the flash of Masako’s camera and the numerous fast-paced pursuits through the dingy corridors are genuinely tense. We are also treated to an atmospheric score that seems to improve as the pace tightens.

sequence and also Rai and Kondou’s gratuitous romp is a little more graphic than stateside cinema would generally allow. It’s in the gruesome murders though that the film really makes a statement and those that involve the ‘death traps’ of the title are uncomfortably mean-spirited. Shinichi Wakasa ‘s effects are a cinematic bloodletting buffet and the way that they’re staged and complemented by such a savage tone makes them hit home hard. One of the easiest shock scenes to remember is when Nami is tricked into murdering her friend by inadvertently rushing to rescue her. Click on the video link above to see it for yourself. .

Dead Trap was financed by JHV (Japan Home Video), a pioneer in the launch and distribution of video cassettes in Japan and one of the country’s leading media corporations. They essentially wanted a vehicle for

promising actor Hitomi Kobayashi, but Ikeda disagreed that she was the right person for the lead and stood his ground. He went on to cast his original choice, Miyuki Ono as the protagonist and it paid off as she brings a childlike innocence to the heroine role. But for all the visual flourishes that the film possesses, it does fall foul of a slice of poor cinematic balancing. The murders are indeed gruesome, but they all come in the first 45 minutes, which leaves a. a second half that’s unable to maintain the momentum. Undoubtedly six victims is hardly a

minuscule body count, but they’re all dealt with before the mid-film mark and the rest of the runtime seems disappointing in comparison. Whilst it seems unfair to criticise the story for striving for originality, it’s a tad too bizarre for it’s own good, and could have been structured more efficiently.

Evil Dead Trap lives up to its gruesome reputation and is almost as bloody as Scott Spiegel’s Intruder from the same year. It doesn’t make as much of an effort to include black humour though and feels darker and more gloomy in comparison. The supernatural ending does seem somewhat misplaced and the nonsensical descent into a peculiar mix of Alien and Basket Case does leave you feeling, well, rather confused. Also as the movie progresses, the intelligence of the characters – they had

little to start with anyway – completely evaporates. At one point Nami had the chance to escape without serious injury, but returns into the killer’s clutches because he ‘… killed her friends’…!

These minor gripes though are meaningless, because this is still a good and very scary movie. The first forty-five minutes alone make it worth the purchase price. Most of the faults are deeply buried under the stylish photography and razor sharp suspense. One has to wonder how the sequel would’ve turned out if Ikeda had not been unable to work on it due to him being hospitalised. He had a synopsis written, which included Miyuki Ono back as the hapless TV host. The director that replaced him really managed to take the steam out of the franchise and this is certainly the cream of the crop of the series.