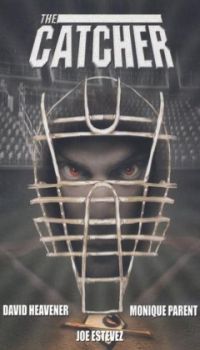 Ever since Black Christmas hit cinemas thirty years ago, the slasher genre has terrorised nearly every possible

location that’s known to mankind. We’ve had killers at holiday camps and carnivals, trains and houseboats and even ski resorts and building-sites have become the stomping ground of an insane nut with a large blade. It came as a surprise to me then, that no one had yet decided to pitch a deranged slasher at the home of America’s favourite sport. That’s right, we haven’t yet seen a psychopath invading a Baseball stadium, despite the obvious amount of victims and potential for a bloodbath.

It took right up until the year 1998, but The Catcher has set about changing that, by offering us a story that involves a twisted ex-ball player with murder on his mind and a bat in his grip. Who needs a hockey mask when you can wear a batting helmet? What’s the point of a summer camp, when a stadium has even more potential victims? Lastly, forget about a machete, because a baseball bat can do just as much damage. Guy Crawford and Yvette Hoffman saw the obvious possibilities, so without further to do, let me tell you about The Catcher…

We start where we’ve started countless times before, with the good old abused child murders parent scenario. The

gimmick added this time is that the motive involves baseball and the weapon of choice is a handy bat. Next we are introduced to the compounds of The Devils’ stadium, presumably sometime in the future. (We never find out for sure.) ‘The Devils’ is a baseball team that have been unable to recover from a slump that the players believe is down to the performance of David Walker (David Heavener), their one-time top hitter.

It’s the last day of the season and Walker has already been thrown out of the game and whilst he’s waiting to say good-bye to his teammates, his girlfriend enters the locker room to tell him that she’s leaving. As if that wasn’t

enough of an excuse to turn someone into a homicidal masked-maniac, next up he finds out that his new manager (Monique Parent) is about to sack him. (I hate those days) Before long, a mysterious killer begins slaughtering the sportsmen one by one using various macabre methods. Is it Dave Walker getting revenge for being fired? Or has someone else got something against the players?

For a direct to video horror movie, I was impressed how well The Catcher hides its financial restraints. The cast

includes a few regular B-movie faces, but also some actors that do indeed have credible resumes. Don’t get me wrong, the level of performances aren’t far above the norm, but David Heavener does give us a couple of noteworthy scenes and Monique Parent brought class to the lone female protagonist role. It’s a shame that they were let down by an inexplicably obnoxious turn from Joe Estevez, who underlines why Francis Ford Coppola chose the other brother to send up the Do Lung River to terminate Colonel Walter E. Kurtz. I admit that it’s harder to judge actors for their efforts in flicks like this, because direction plays a huge part in the coaching of dramatization. I am sure that there’s little more motivation involved than just phoning something in for a small paycheque.

Whilst perhaps not being the best from a dramatical standpoint, Crawford and Hoffman do shoot everything creatively. The use of dolly tracks and steady-cam means that they haven’t scrimped on what’s needed to make the right impression and they give the movie a bright and polished look. When it comes to the murders, the theme is maximised to incorporate some fun basebally-charged kill-scenes. The best of those included a ‘death by pitching machine’ set-piece and another unfortunate guy gets a bat rammed up his

bottom, which was rather bizarrely staged. I mean, at first I thought the maniac was about to rape him!

All the typical slasher clichés are accounted for, including the hulking masked killer, final girl and a cheesier than a dairy POV shot through a baseball helmet. There’s even a few decent twists to keep you guessing through the mystery and even though it’s all been done before in previous efforts, I was never convinced for sure that I knew who it was that was behind the mask.

There was at least one scene that stuck in my mind, which saw the final girl have to chose who to stab out of two identically dressed ball players as they fought on the floor. One was the maniacal killer, whilst the other was trying to stop him and it was a smartly conveyed sequence that delivered some suspense. Come to think of it, The

Catcher does have a handful of such moments that show ambition, but it’s just a shame that there are so few of them.

As is common in late nineties entries, we don’t get much in terms of memorable gore and most of the murders are either off screen or involve just a splash of corn syrup fake blood, which was disappointing. The fact that we didn’t find out where the killer came from after his identity was revealed, shows a weakness in the script and we never learned if if he had escaped an asylum or had perhaps worked on the Hot Dog stand? Who knows? It’s also peculiar that Paul Amorosi’s score and the lighting was so patchy, because other areas, like the cinematography that I mentioned earlier, were slickly produced. What perhaps let the finished picture down most technically, was the editing and sound

mixing, which was clunky at best and jumped like an alcoholic playing hopscotch at times.

The scenes that involved Estevez playing a ghostly apparition fell in to the dreaded ‘rather press fast forward’ territory, simply because he overacted so blatantly. It’s hard to believe that they couldn’t get any better takes from a performer of such experience and he gets far too much screen-time for such an abhorrent character. We also never get a real explanation of the psycho’s motives, which left an unnecessary feeling of half-heartedness that’s unforgivable on a feature debut. There’s one lengthy chase sequence that involves Monique Parent fleeing the nut job through the corridors of the stadium. Even if the pursuing shots weren’t put together too badly, it was obvious to see that she was ‘running’ at the speed of a tortoise that was recovering

from a leg operation, so that she wouldn’t outpace the dolly track. In the end, the build up of all these negatives massively outweighed the few good parts that I’ve noted and I can’t think of a reason why they weren’t ironed out prior to the film’s release

So we have had a baseball themed maniac flick now, but I am still waiting for a psychopathic soccer star. A ball kicked the right way can really do damage…. Also, the director of Blood Junkie has apparently set about making another baseball slasher called Billy Club. I can’t wait for that… Oh and I almost forgot to mention that inside the VHS box I got a free The Catcher postcard with an image of the killer with glow in the dark eyes…. make of that what you will… 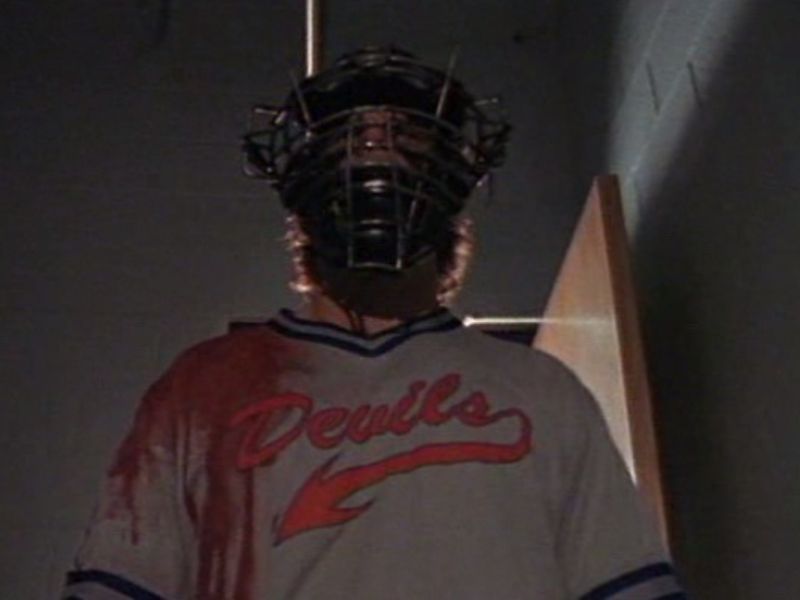