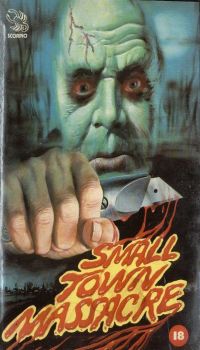 I have already written reviews of this for other websites, but it’s one that I wanted to update a little, because it holds a

very special place for me amongst the billions of slashers that I’ve watched and I think it’s an underrated gem of a feature.

I don’t have the greatest concentration span even now, so you can imagine that as a ten-year-old, I never really understood the plot or even that it was different in anyway from the other slashers that I had seen. However I always recalled the awesome party scene and the claustrophobic final sequence, which still holds-up quite well.

Some of the best slasher action of the golden period –

A sleepy suburban town in Illinois becomes the target of a maniac killer when bodies of the local townsfolk’s teenage children begin turning up hacked up and dismembered. The Police are stumped as to who it is that’s slashing his way through the community, but things are far more mysterious than they initially seem…

Now Small Town Massacre is not a typical slasher movie – I mean in the Halloween rip-off kind of way. Director Michael

Laughlin had an idea of a plot and included enough to make his movie appeal to the category’s fanbase, which was big in 1981. Clearly too intelligent a director to flagrantly imitate his inspirations, he instead pays homage with a few instantly recognisable nods. One of those is a stand out scene where the killer in a great mask (Tor Johnson – the wrestler/actor) stalks two teens parked in a secluded lane. There’s some great imagery and shots of the assailant lurking in the bushes and then picking off the male as he has to exit the vehicle, only to return to murder his unsuspecting partner. I honestly think that it is one of the best teen-kill set pieces of the golden era and you can’t really get any more ‘slasher trademark’ than that sequence.

Like the majority of eighties children that emigrated to London, my family were quite poor and I was brought up during my earliest years listening to old 7” singles on the grimy record player in our front room (we didn’t even have

TV) and so I have maintained a fondness for the music of the the rock and roll generation, which my mum adored. That probably contributes to my love for this slasher because much like John Carpenter’s Christine, it boasts a deliberate retro ambiance that recalls the age of innocence and the locality of close-knit communities of the fifties/sixties. Suspense is built not by sharp editing or hokey gore, but by the storytelling. Deeply developed characters and well-worked relationships help to bring a ‘small town’ vibe to the plot and it gives the film a unique personality, which includes people that you actually care about in key roles.

Whilst talking about retro, we cannot forget to mention the (now) notorious scene where a bunch of teens dance in

tandem to Lou Christie’s ‘Lighting Strikes’ whilst dressed as sixties TV characters. It’s an amazing sequence, because it doesn’t feel out of place and the story is so well delivered that the mood can change in an instant. The choice of song (writer Bill Condon’s favourite – the guy has taste) is another bonus from an already outstanding soundtrack, which sees Tangerine Dream keep the tone perfectly. – If you’re gonna mix former Rock and Roll teen idol Christie with a masked killer, you’ve got to be a man with ambition.

The choice of cast is notable for selecting actors based on talent and experience rather than status, which is exactly what the feature needed to maintain the closeness of the characters. There are solid turns from Fletcher and

Dignam, whilst Lewis did a credible job as the sadistic nurse (She created a character that’s so easy to hate). The film really belongs however to Murphy, Shor and Young for the strength and chemistry of their relationships. There’s a scene in the beginning where Murphy and Shor engage in a conversation (about shaving) like a father and son would do and it’s moments like these that add welcome depth to the characterisations. I liked the microwave romance between the two ambitious lead youngsters and the warmth of the witty dialogue. It’s no surprise that Condon would later get an Oscar nod for his writing skills.

eighties and this was one (arguably the best) of a number of features that he was involved with. I was surprised to learn that this was in fact an Australian production, as it has an almost entirely American cast and strong continuity to keep everything in check. It was filmed in Auckland (the first time for a horror film), but you’d never notice that it wasn’t a small Illinois town as the plot describes.

As I said earlier, the film relies on it’s storytelling to provide a fear factor and there’s no gratuitous gore, but there’s a nasty syringe pushed into an eyeball scene, which is very hard to watch. When the killer(s) strike,

there’s enough creativity in the murder scenes to show that Laughlin had done his homework on the slasher genre and the ending is authentic, unexpected and intelligently conveyed.

The luscious wide lensed photography must’ve looked amazing in the cinema, with long tracking shots of the New Zealand countryside, but the transfer to VHS was terrible and cropped the

visuals catastrophically. Thankfully DVD has solved that problem and the plasma generation can enjoy the beautiful photography as it was meant to be seen.

Aside from some cack-handed editing in places, there’s really very little wrong with Small Town Massacre. A neat and extremely underrated chiller that boasts enough of the necessary ingredients to sit amongst it’s slasher brethren from the period.

I truly believe that Small Town Massacre is overlooked and somewhat mis-understood and should stand much higher as a successful mix of cinematic styles and great performances from a note-perfect cast. 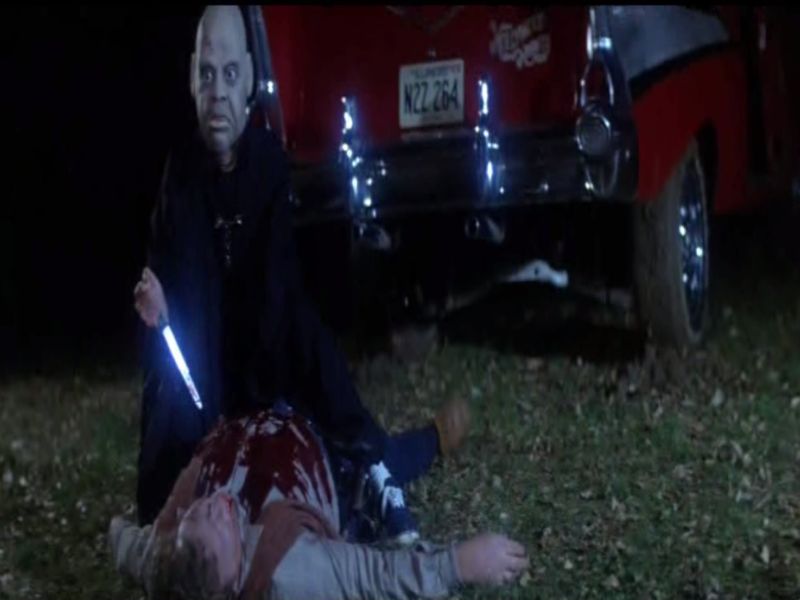