aka Pieces/Cries in the night 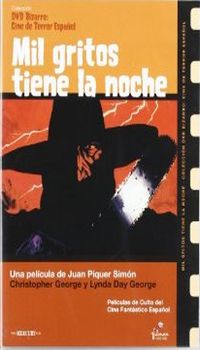 I must admit, it’s been cool being Spanish lately. What with the immensely popular and equally as successful Rafael

Nadal tearing up tennis and La Furia Roja wining the European and then World Cup whilst playing the best football imaginable, it has to be said that from a patriotic standpoint, all is going well for my country.

The thing is, when we look at slasher movies, our output leaves me pretty much lost for words when it comes to competitive banter. It makes it harder that despite a few stabs, Mil Gritos Tiene La Noche is the most recognised (but not the best) effort of my country’s involvement in the slasher cycle. Just a quick browse through the reviews online and as of yet, I haven’t seen one that praises Spain’s weapon of choice for stalk and slash genre recognición

So I took it upon myself to start preparing my defensive arguments. A legend of Spain from Simón’s era is singer/poet Joan Manuel Serrat. His most renowned LP was Mediterraneo, which got him expelled from fascist Spain for its intelligent subtle lyrics and views on the struggle of Spaniards under El Generalissimo, Francisco Franco. A

fine example is the track, Barquito de Papel (small boat of paper). On first impression, it seems quite harmless and even my brother still likes to look at it as a song about a young boy, at a time when money in villages was invisible, floating the aforementioned barquito (boat) down a local stream (something he used to do.). But lines like, “Without a boss, without a direction it travels where it wants to” were a shrewd dig at the struggles of our people under fascism and the truth was in the subliminal messages.

What if Mil Gritos Tiene La Noche was made under a similar message? What if Simón’s slasher was really a social

comment on our obsession with image? Maybe he was hinting that you can’t build the perfect person and that we should all accept that everyone has pluses and minuses and we could get lost in the search forever? Or maybe the chainsaw wielding maniac was our lust for credit and the message was that we are starting to dismember our economy (just look at how we stand at the moment)? Ok so I’m reaching…

In the end I decided to try a different trick. I returned home and told my flatmate, a film (but not slasher) fan, who generally trusts my judgment that Simón’s effort had a 7.5 rating on IMDB and was an intelligent psycho thriller. I wanted to see if the movie’s reputation had led it down a path of poor reviews because people had read so much rubbish about it that they went in looking exactly for that. Media opinion can have a big sway on our

A masked maniac is stalking a college campus and murdering co-eds, leaving them with missing body parts. Armed with a chainsaw, the police are baffled as to his identity and bring in extra help to solve the case.

One thing that critics never acknowledge is that this is in fact a tribute (dare I say rip-off) of Narciso Serrador’s La Residencia. That movie probably had a big effect on Simón when he was younger and the influences are

undeniable. The film was shot in both Boston and Madrid with producers from Italy, Spain, England and America. As far as I am aware cast members like Frank Braña, Gérard Tichy and Silvia Gambino could not speak English, so you can imagine some of the on-set confusion.

Admittedly there are some great inadvertently humorous moments that I can’t provide an reasonable defensive excuse for. The best of these is when a Bruce Lee lookalike violently attacks an undercover Police officer and then the pair laugh it off as it’s all down to ‘…Some bad chop suey’. This was actually intentional as the actor was from a Kung Fu movie that Dick Randall was working on at the time and Simón wrote

the scene on the spot to include him in a cameo. Oh and I can’t forget to mention when the Lieutenant tells his colleague to, ‘take some uppers’ to stay awake and help with the case. Also, what about when one goofy big-breasted floozy spouts, “The most beautiful thing in the world is smoking pot and f***ing on a waterbed at the same time” – Or the Footloose-esque boogie scene, which sees a bunch of leotard clad eighties bunnies twisting and dancing and seems to have been choreographed by Stevie Wonder but offers absolutely *nothing* to the story? I could go on, but I’ll save some moments for you to uncover for yourself.

Now inept Police forces in slasher movies are as essential as a twisted killer, but Christopher George and Frank

Braña manage to take things to a whole new level. I may not be a master detective, but I would say that anyone who has been found in the vicinity of a gruesome chainsaw killing more than once and has no solid reasoning as to him being that close would probably be considered at least a ‘considerable suspect’. Well these bozos let college student Kendall (Ian Sera) work alongside them throughout the runtime and he even finds the clue that cracks the case! .

Credit has to be given to Basilio Cortijo for his brilliant gore effects, which are very well done. The film is one of the goriest of the period and for that alone it is well worth a look. It also never gets boring and has become a classic

Grindhouse/drive-in favorite with a strong and loyal following. You definitely can’t knock the director for his effort and if you watch it with an open mind, some of the murder scenes are effective if not creepy. Also, many critics pick up on this perhaps unfairly, but the girl smashing through a mirror at the beginning DOES have something to do with the plot. It is meant to signify the return of the murderer’s psychosis (it was launched by a smashed mirror in the opening). It’s not handled in the best way, but that was the point that they were attempting to get across. I just actually got an update from one of the cast and apparently a lot of scenes were shot that didn’t make the final print. Reportedly, one of those was the

aftermath of the aforementioned mirror scene where the girl says that she’s ok and the maniac is shown lurking nearby. In fact it is that same bunny that gets her head lopped off immediately after. All this got me thinking that maybe Simon’s film would have made more sense with everything included. Who knows what else was left on the cutting room floor? There was definitely a few gore scenes that were not featured, so who knows how a director’s cut might look?

Ok so I have tried to give a different perspective and can openly admit that there is a lot to laugh at with the production of this feature, but then there were with most slashers of the early eighties that were not European

produced (Graduation Day, Fatal Games et al). My flatmate actually really enjoyed it (partly because she thought she was cool by working out the killer’s identity – by his shoes!) and she gave it the thumbs up (admitting however that it’s not scary).

Mil Gritos does deserve a place in the annuals of slasher history and kudos to Simón who said he never cared what the critics said; he just really enjoyed making these movies. It may not have got the reviews that he initially intended, but I loved watching it all the same. You need to see it for the breathtaking scene when Lynda Day George summons every bit of her minimal acting ability to scream, ‘Barstard, Baaarstaaard….BAAARRRSTAAARD! It’s up their with the napalm scene from Apocalypse Now and the opening of The Godfather. Brilliant. Absolutely brilliant. Just as the trailer said, it’s exactly what you think it is…